Hurricane Isaac ..lots more to come…BBC TV Special with Doug Copp and 3 scientists predicted the current ‘giant’ floods and what will come next. 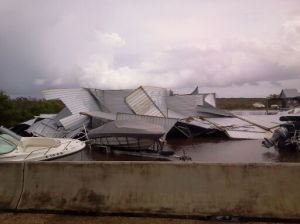 Below is a reprint of an earlier posting. It has been updated to allow people to understand flooding events in Louisiana; including, the social cost and psychological effect of repetitive disasters.  At the time,  this TV program, produced by the BBC was the ‘costliest, biggest budget, program ever made by the BBC. It was buried, after the initial broadcast; because the BBC Executives considered it to be too frightening, for the public. The Corporate World wanted to keep people in a  ‘low information’  state of mind; so that, profits/shareholder returns would not be jeopardized. The truth is the truth. It is frightening; however, ‘life before profit’ has always been my moto. If you are interested in knowing that the ‘train is coming, down the track..before it runs over you then watch this high quality BBC production. It takes place on the nightly news broadcast in 2050. The anniversary of the beginning of the end.

On a personal note, to the people of Madisonville LA and the rest of the north shore:

The Army Corps of Engineers ,of the USA, have publicly claimed that the New Orleans levee system are NOT causing flooding to occur, on the North Shore.
I think that is a False Conclusion.
My argument is:
Given: 1) Water flows downward because of gravity, 2) Water levels to the same level above sea level on both sides of Lake Pontchartrain, 3) If you stop the normal flow of water then it will back up or rise to a higher level till it can escape to a lower elevation. 4) The levees were built to stop New Orleans from naturally flooding.and allowed water to back-up or rise on the Lake side of the levees.
Facts:
1) The elevation of New Orleans, on the shore of Lake Pontchartrain is an average of -6 (6 ft below sea level Lake side elevation is -18 ft). minus elevation

2) The elevations of Madisonville and Mandeville , on the other side of Lake Pontchartrain are both 7 ft.. (Wikipedia) positive elevation

The levies have successfully protected New Orleans, by ‘backing up’ and diverting water. Understand that water needs to flow down with gravity..Just like ‘down the sink’. if you stop it from flowing into it’s natural route (New Orleans) (or ‘down the drain’ then it goes somewhere else (or overflows the sink).

Don’t believe any agency that tells you any different. It just can’t get any simpler; but they deny any and all responsibility/legal liability, for your loses…anyway. Such is the way of our world. The truth is hard to find in a flood of lies.

Let it be clearly understood that I believe it makes absolute sense to protect the city of New Orleans and sacrifice other less strategic areas..IF ABSOLUTELY NECESSARY..; however, I don’t believe in standing by and letting people be victims. I am sick and tired of lies. The truth should be told and ‘the right thing’ should be done. The Army Corps of Engineers did the ‘right thing’ to protect New Orleans but they shouldn’t have lied or covered up. They should always do ‘the right thing’.

I have along history of being ‘crucified’, ‘whipped’, lied about, shot at, receiving death threats and much more because of a similar battle against money, greed, power, insurance company shareholder return being more important than school children surviving earthquakes via the  ‘triangle of life’. ( see this blog)

Just trying to do ‘the right thing’.

BBC TV Special with Doug Copp and  3 scientists predicted the current ‘giant’ floods and what will come next.

The Current Giant floods were predicted. This ‘big budget TV Production’ video is a mock-up of the evening news, from 2050.

Doug Copp, in this Award Winning BBC Special, is featured, along with 3 of the world’s leading scientists, explaining your present and YOUR FUTURE……………… with these ‘soon to be’ normal events.

Understand why these events are happening and how your life is going to be impacted today, tomorrow and for the next 40 years. Get used to destructive weather. This is a high production but very scary movie.

The setting is the 2050 Evening TV NEWS special/ documentary explaining what happened in the world from 2000 to 2050. This BBC program was the ‘biggest budget special’ when it was produced. In spite of money invested, Political Pressure ‘squashed the program’ for fear of people rioting for reform.

The Video still contains the original ‘black-out sections-to insert Commercials. You will need to speed ahead or wait for the period to end. The entire video is 53 minutes long.

or This will open your eyes like George Orwell did with ‘1984’”>click here and go directly to Doug Copp’s other blog and watch the video.

3 Responses to BBC TV Special with Doug Copp and 3 scientists predicted the current ‘giant’ floods and what will come next.

Prior to 911, I was the most experienced rescue person, in the world. Permanently disabled from 911, I have changed my life-focus towards preventing bureaucracy and vested financial interests from causing the deaths of 200,000 children per year. I am promoting the belief that the lives of children are more important than American Insurance Company Shareholder profits. International Disaster Reduction Institute Institute of International Disaster January 2010 – Present (3 years 10 months)worldwide The world's most experienced Rescuer/Disaster Mitigation Management Expert , crawling inside of 896 collapsed buildings at 100+ disaster events during war, peace and revolution Plus a lifetime of High Adventure; including, an undercover cop. .At almost 3,000 serious life threatening events and the medical survival from enough toxins to kill 200+ people, I am probably the world's leading survivor, from death. Survival Scientist Linkedin Profile: Summary saving lives, reducing suffering. "You must not only be good. You must be wise and wise enough to know who is good." doug copp Sometimes it is NOT enough to do good things ..you must be strong enough to endure the attack...that will follow; especially if you are trying to place children's lives ahead of USA Insurance Company Profits...crawling inside of 896 collapsed buildings helped to give me the courage that it takes; especially, considering that I have been sick every single day; since 911. FYI: USA Insurance companies oppose my 'triangle of life' survival method; because, 90% of the children would survive; instead of 98% dead. This translates into//actuarial tables indicate, survivor's seeking compensation for trauma (physical or mental) with a net result of diminished shareholder return. The insurance Company Executives told us: ” We are in the business of maximizing shareholder return..NOT..saving lives.” The USA School Boards have been told by their Insurance Carriers that their policies would be terminated or the premium would become extreme..if the children are allowed to survive, following my method. I tried to learn: I am responsible for 'what I do' and for 'what I do NOT do'. I am responsible for 'MY actions'. I am not responsible for what other people do. I discovered: that people never regret 'doing the right thing'. They only regret 'doing the wrong thing'. A life devoid of 'something worth dying for', is a life, 'not worth living'. Do all the living you can; while you can. 650,000 people died, at the major disasters I worked at..I have seen things that you cannot imagine. For all the persecution, hatred, violence and disgusting behavior that I have endured; in fighting against, evil, greedy bastards who exploited the helpless and preyed upon people..I am glad that I always did 'the right thing'. I always stood up; many times, by myself; but never alone.. If you can't be YOURSELF then who can you be?
View all posts by doug copp →
This entry was posted in Uncategorized and tagged 911 aniversary, ARTI, disaster, doug copp, duck and cover, FEMA crime, First reponders, first responders, flood, horror, Hurican Isaac, Hurricane, Hurricane Isaac, Hurricane Louisianna, Isaac Hurricane, Katrina, LA Flood, Lake Pontchartrain, Madisonville, Madisonville flood, Mandaville flood, New Orleans, north shore, private schools, public school board, quake alarm, rescue, school safety, survival triangle of life. Bookmark the permalink.

1 Response to Hurricane Isaac ..lots more to come…BBC TV Special with Doug Copp and 3 scientists predicted the current ‘giant’ floods and what will come next.