A great Injustice. You were duped

Posted on October 14, 2010 by doug copp
Below is a draft of an email that I plan to send to some of the thousands of  newspapers tricked by Thompson Lang, AlBQ Journal in to publishing false material, for his personal revenge. The email draft is followed by the 2nd article, appearing in the California Newspaper. It is called  What Really Happened at the World Trade Center. It is an expose of Thompson Lang.
“I am not angry with your newspaper; although, I am very angry with your policy of publishing articles without any verification, for truthfulness.
Normally, you expect newspapers to publish ‘real’ stories and not complete fabrications designed by the newspaper owner to use his newspaper as a ‘baseball bat’ to ‘beat the brains out of ‘ someone who ‘got in his way’. You were duped by someone who brings absolute disgrace to your profession.
In 2004, your newspaper carried the story referred to in today’s California newspaper story.  Today’s California newspaper is titled: ‘What Really Happened at the World Trade Center’ . Your original article Headline referred to me as : The 911 Phoney’ and carried a photoshopped image of me with my penis sticking out of my pants; with references to me as a ‘knucklehead’, buffoon’, criminal, idiot, phony, fraud and much more. Lang, owner of the Albuquerque Journal, used his 5 front page articles, 24,000 word ‘attack’ to try to ‘push me over the edge’ and die from my 911 injuries. There is no doubt, in my mind, that Lang tried to kill me. I refused to die.
Nine (9) years later, I am still alive; however, I remain, very sick, permanently disabled and am being treated by several doctors, for many 911 illnesses; although, your newspaper published Lang’s articles demanding that the FBI imprison me for falsely claiming to be injured, at 911.
Follow, the link  http:www//www.amerrescue.org  to read a ‘library’ of hundreds of documents, a Time Magazine Article, 70 videos and the link to today’s California newspaper to ‘discover’ how you were DUPED.
Not only, was the article, that you carried  completely false and obscene…it went way beyond ‘yellow’ journalism and was an act of pure vengeance and revenge by the owner of the newspaper, Thompson Lang. Lang was described by the world famous attorney, F. Lee Bailey, as a “power hungry bully”.
I tried to get ‘justice’, from the courts. Lang spent $1 million plus in legal fees, with 4 years of ‘motions’ before I ran out of resources, to continue. I was told that it was useless to take a wealthy and demonic character like Lang, to court. Indeed, he openly brags that he controls the election of every elected official, in New Mexico ( that includes judges) , via his media monopoly and his vast inherited wealth. The only justice that I got was ‘in my ass’.
I include the text of the California Article exposing Lang and the way he tricked you into helping him destroy myself, the world’s most experienced rescue team and resulted in the death of thousands of victims who died because Lang’s vengeance prevented us from saving them.
If you are a  person, with the most minute amount of decency then I expect you to do 2 things. First, to publish an apology to me and my rescue team stating that you were tricked, by Lang. Secondly,  to express your disdain with Lang for having tricked you into helping him destroy a dedicated, all volunteer, rescue team.
I do not have the resources to send this email to the several thousand newspapers who carried the original false story. Lang, in his normal ‘over the top way’ sent the article, via Associated press, other news agencies and had it translated and sent to dozens of countries that ARTI had saved lives in.
His vengeance was like ‘dropping an atomic bomb’. You were part of it.
Do the right thing.” 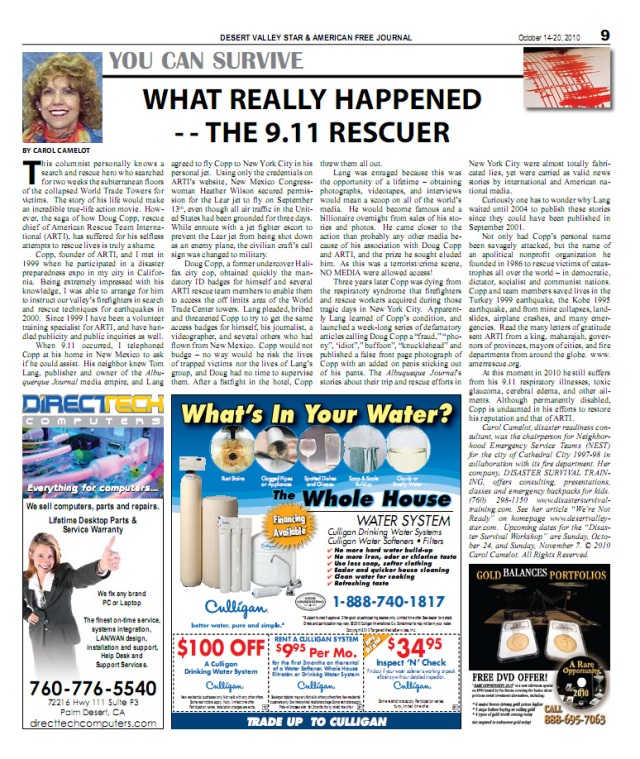 3 Responses to A great Injustice. You were duped